May 22, 2014
WHY I'VE BEEN M.I.A. THESE PAST MONTHS
If you follow me on Strava, you might have learned that at the end of the 2013 season, my Continental GP4000S tire blew up right after I made a solo attack and reached 33mph.  It sent me falling to the ground on my back and shoulder, gave me a concussion, plus strains and sprains at my neck, shoulder and abdomen.  The most dangerous aspect of my fall was that it was impossible to anticipate the tire failure.  The tread separated from the casing and caused an instant loss of traction- enough to send me to the ground despite travelling in a straight line.  Here are some pictures of my wounds.  Some of them went deep enough to reach my fat cells.  Check it out: 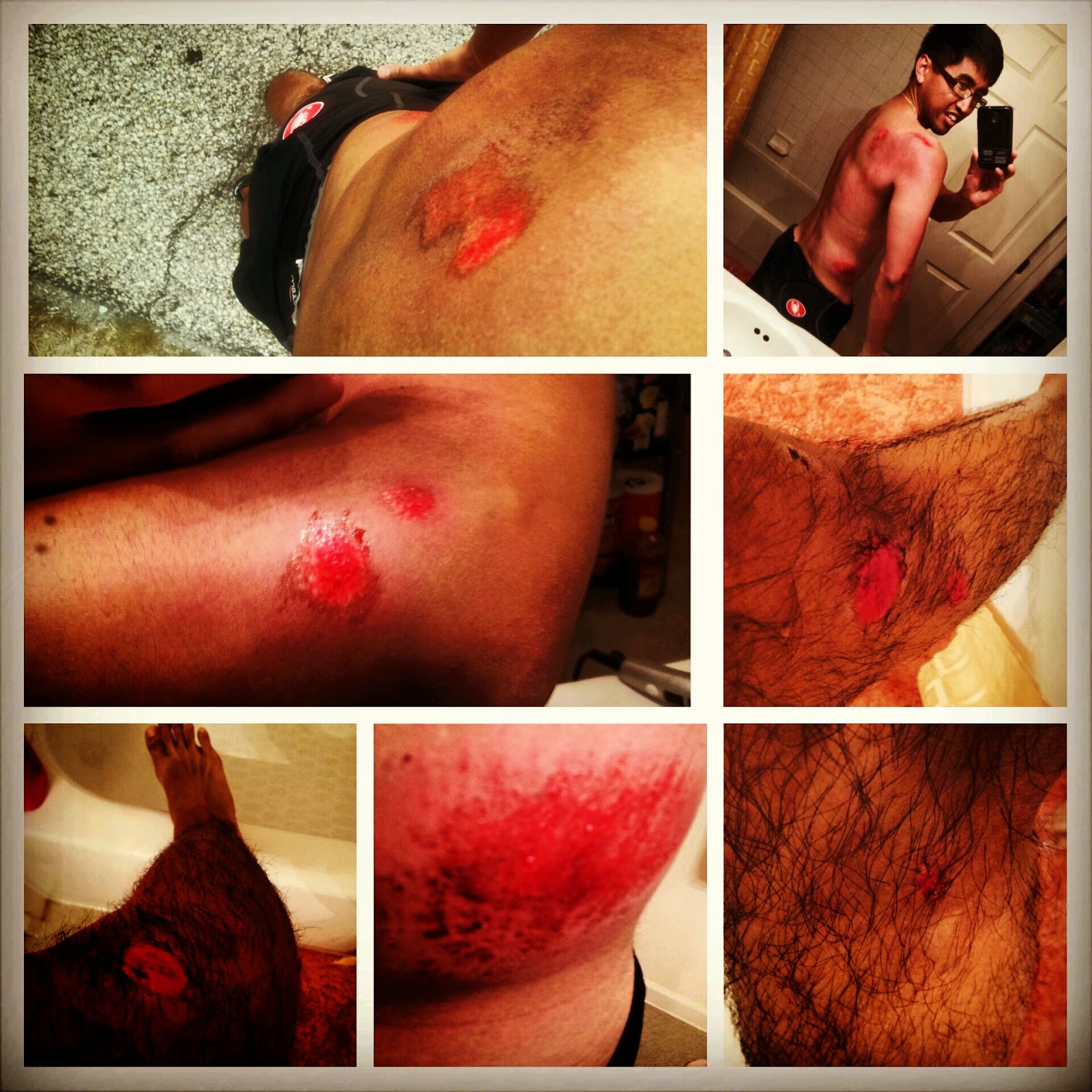 After 2.5 months off my bike to focus on rehabilitation, I was finally able to turn my head without my neck and shoulder going into spasms.  When I finally made it back on a bike, my legs and lungs hit the wall 15 minutes into the ride and forced me to stop.  Afterwards, my neck proceeded to go into spasms for hours due to the riding position.
Continental never apologized or responded to my concerns about the tire.  My tire had no sidewall bubbling or cuts, and I actually checked my tire pressure with a tire gauge prior to its failure.  Despite riding on several pairs of Continental GP4000S tires for three years, I probably will never ride on them again.
Without my girlfriend of seven years, I wouldn't have survived the months healing and rehabilitating the injuries I sustained.  She patiently waited for me as I spent hours in the shower trying to tolerate the massive pain all over my body.  No one else could lighten the mood and help me laugh through the healing process.  The proof is in the pictures!  I was smiling in all of them thanks to her! :)

MICHELIN PRO 4 - MY NEW FAVORITE TIRE
After riding on a defective Continental GP4000S, I decided to go tire shopping to find a better tire.  After riding on the Michelin Pro 4 for almost ten months now, including three criteriums, I can confidently say that its better than the GP4000S.  I've only had one flat which was caused by hitting a deep pothole.  I've always known the Continental GP4000S to produce flat tires from hitting decent pieces of gravel.  I remember worrying on several occasions that I would flat after hitting similar objects only to find that the Michelin Pro 4 survived without a scratch.  The grip surprised me the most about the Pro 4.  I wouldn't be surprised if an independent research company finds that the Michelin Pro 4 has better grip.  I've taken corners just as hard or harder than the Continental GP4000S this season.  I have yet to experience its limit around a corner.  I always thought that some sliding was normal in a tire until I tried the Pro 4.

THE COURSE & THE LAPS LEADING TO THE LAST LAP
As usual, I got lost trying to find the parking lot in Eagle Creek, so I ended up running late.  As a result I didn't get a chance to ride warm up or practice laps.  As soon as I received my number and had it pinned, I immediately had to line up at the start line.  Since I was also late to line-up, I had to start at the back.  I wasn't too worried since I knew we had 45 minutes to race.  Plenty of time right?

When the race started, Each lap only lasted about one minute and 44 seconds long.  I basically spent the majority of the race trying to move up to the front of the group.  It was hard trying to remain at the front due to the constant rotation of the group, and by the time we reached the final lap, I was about fourth place... from the back!

THE LAST 1/2 OF THE LAST LAP
By the time we hit the bell lap, I was definitely panicking and almost accepted that I had no chance at even reaching a mid-pack finish.  That all changed about halfway down the lap.  The group hugged the inside of the road and left a moderate opening at the left.  As soon as I saw the opening, I knew that it was my last chance to reach the front, so I accelerated hard and bridged up to the front.  Once the five leaders were in sight, I noticed that I was approaching them quickly... while coasting!  Instead of coasting and slowing down to their speed, I started my sprint with an advantage and blew past the leaders.  When I crossed the finish line in first position, it didn't seem real, especially since I was almost last place by the start of the last lap!

ANALYSIS VIA STRAVA (FOLLOW ME ON STRAVA)
Looking at the speed graph in the screenshot below, you'll notice three peaks.  The first acceleration was influenced by the group being aware of the last lap.  The second peak occurred when I bridged up to the front.  The last peak was the final sprint.  You'll notice that it took more speed to catch the leaders than it did to perform the final sprint!  Everything seemed to connect perfectly today! 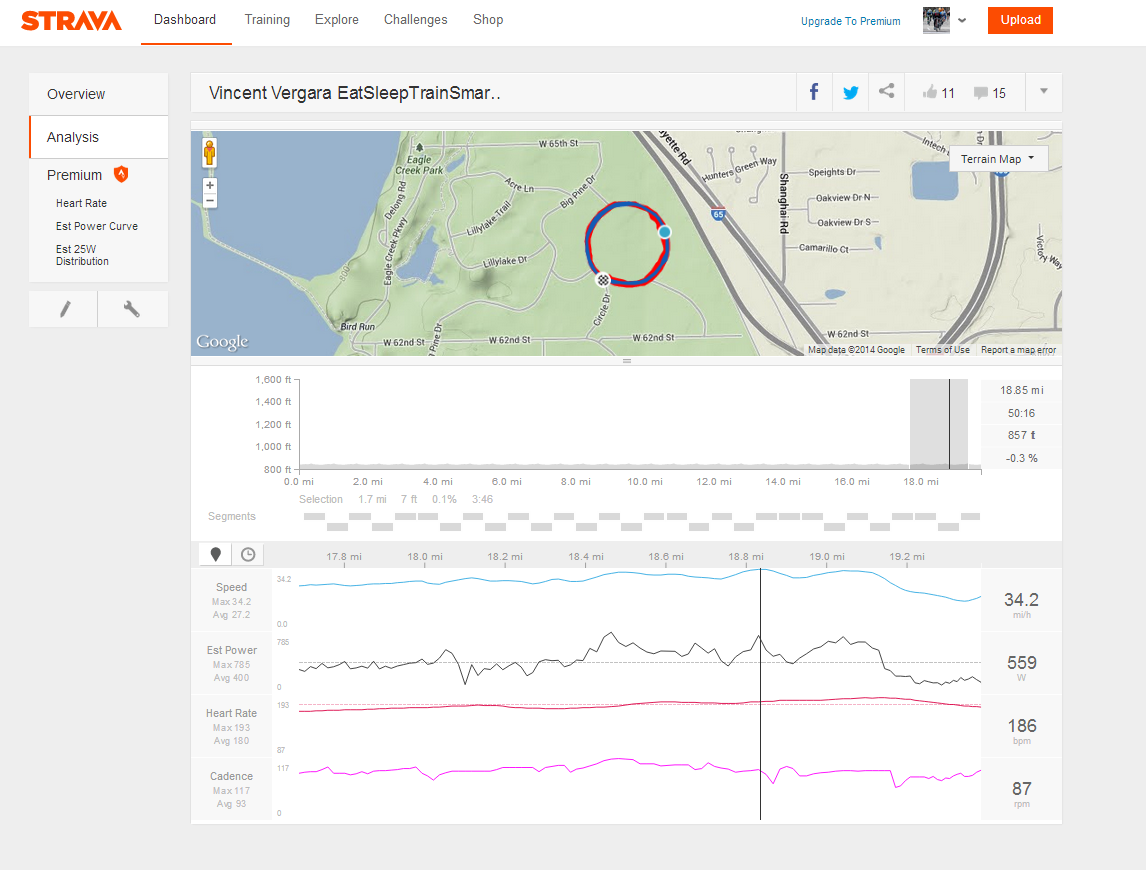 SPONSORS
Big thanks goes to Velocity Wheels and The Wheel Department for helping me replace my severely bent A23 Pro Build wheelset!  Your support helped motivate me to train and win the first race of the 2014 season!  Thanks guys!

Popular posts from this blog

December 05, 2011
CLEAT POSITION:  There are four types of adjustments which can be made to a cleat.
Fore/ Aft:  FORE:  Positioning the cleat forward allows the ankle to move more freely, allowing for a smoother pedal stroke.  The trade-off is that this requires more ankle stability, calf strength and puts the rider at risk of developing quad dominance.AFT:  This position limits ankle motion.  This provides added stability to the ankle, allowing the calves to rest, but makes the rider prone to bouncy pedal strokes.  When switching from a forward cleat position to a rearward position, a lower saddle position is needed to compensate for decreased plantarflexion.Lateral/ Medial:  The goal is to spread weight evenly across the foot side-to-side.LATERAL:  Shifts weight towards the outside of the foot (small toe side).MEDIAL:  Shifts more weight onto the medial side of the foot (big toe side).  Limits the maximum amount of external rotation available before the heel strikes the crank arm.Rotation:EXTERNAL:  S…
Read more

August 30, 2011
After cycling several thousands of miles with no history of lower back pain to any degree, I hope to clear up any confusion about what posture is optimal for cycling.  This may sound surprising, but a good number of pro cyclists suffer from low back pain despite consulting the most expensive and technologically advanced bike fit technology (3,4).  Why doesn't it work?  What many bike fit specialists fail to account for is the kinesiology of the spine which is influenced by the position of the pelvis.  The saddle can be adjusted in any position, but if the rider has poor posture on the bike, lower back pain is inevitable.  Bike fitters must inform cyclists that rounding the back must be avoided to prevent lower back pain.  After learning why good posture is optimal, you'll understand why no amount of fine tuned adjustments will fix low back pain unless the rider's posture is also corrected.

ROUNDED BACK VS. NEUTRAL SPINE:
I noticed that those who recommend rounding the back…
Read more

Michelin also made their own chart.  Notice how tire pressure depends on both weight and tire size.


THE LONGER METHOD:
After reading an article called "All About Tire Inflation" by Frank Berto, I stopped habitually inflating my front and rear tire to 120 psi.  Based on a discussion with o…
Read more